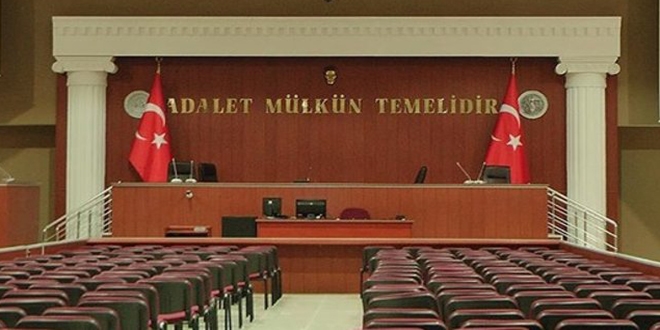 An investigation and a public case was filed against a defense attorney in our lawsuit on charges of being a member of the alleged criminal organization, and based on an imaginary incident of conveying greetings of Mr. Adnan Oktar to an attorney of the complainants, he faces an accusation of committing the crime of “threat by taking advantage of the fearsome power (of the alleged criminal organization)”. Attn. Esref Nuri Yakisan is now banned from prosecution and prevented from defending his clients. (For more details about the alleged incident, please see https://adnanoktarlawsuit.com/2020/08/02/we-are-concerned-about-the-effort-to-label-every-action-related-to-love-as-criminal/)

1. Attn. Esref Nuri Yakisan serves as the defense counsel of 10 defendants in our lawsuit, 4 of whom are still detained and 6 under house arrest.

2. The indictment written against him was merged with the main file no. 2019/313 with the decision of the Istanbul High Criminal Court No. 30, and on 11.08.2020 he was banned from acting as a defense counsel in this case for one year, as per the provisions of CMK (Turkish Code of Criminal Procedure) Article 151/3-4-5-6.

3. The decision is voidable because its aim is not “to prosecute acts of crime”: It should rather be qualified as a decision made as a result of an indictment aimed at preventing the lawyer from contributing to the defense of the main case. It is not a legal and conscientious decision.

4. Before the investigation against him was launched and even right before the decision was made, some of the complainants in the main case file announced each stage in advance on their social media accounts. As a matter of fact, the threats they declared in their posts that “he will be punished and tried on charges of membership in the alleged criminal organization and threatening” have come true, therefore, this legally wrong decision must be reversed.

II. The decision was not taken in compliance with the CMK, therefore it is against the law.

1. In violation of the regulation in CMK Article 33, which reads “Decisions to be rendered during the main hearing shall be ruled on after hearing the public prosecutor, the defense counsel who is present at the main trial, the representative and the other related persons…”, the Court pronounced the decision, only seconds after the request of the public prosecutor, and without giving Attn. Yakisan the right to speak, although he was present in the courtroom.

2. After the public prosecutor states his opinion and the people whom the law commands to be heard are heard, judges who are going to participate at the decision should deliberate, and votes should be collected, as per the provisions of CMK articles 227/1 and 229/1. However, the panel of judges did not deliberate the decision, yet the presiding judge pronounced the decision as a unanimous decision.

III. The investigation about Attn. Yakisan into the allegation of “threatening by taking advantage of the fearsome power” of the alleged criminal organization started after the same panel of judges filed a criminal complaint on 01.10.2019. It is not legally acceptable for the same panel of judges that gave rise to the incident that is the subject of the investigation to render a decision about him.

1. The decision given on 01.10.2019 was by the same panel of judges of the Istanbul High Criminal Court No. 30 and was given again in violation of CMK Article 33. (It was given without a request from the public prosecutor and a deliberation by the panel.)

2. In the decision of the ECtHR in the case of Kyprianou v. Cyprus, it is emphasized that no one should be a judge in his or her own cause.

3. As seen in the ECtHR principles, ECtHR decisions and in particular in the case of Kyprianou v. Cyprus, the panel of judges should conduct self-disqualification if there is a situation that may compromise its impartiality, but the court did not do that.

IV. As per Article 58 of Law No. 1136, an investigation permit must be obtained from the Ministry of Justice before prosecuting lawyers. However, a lawsuit was filed against Attn. Yakisan by not obtaining such a permit.

1. Looking at the accusations against Attn. Yakisan, it is understood that he is accused of his acts within the scope of his lawyer activities. For conducting a public prosecution against him, a permit should be obtained, as per Article 58 of Law No. 1136.

2. If an investigation is completed and a prosecution is initiated without obtaining the investigation permit, a decision on the stay of the proceedings should be rendered as per CMK Article 223/8. But the court did not do that.

3. The investigation against Attn. Yakisan was initiated upon the false notice of a defendant in another case, in which he served as the intervenor’s counsel. One can expect that person, who was found guilty in that case, to feel hostility towards Attn. Yakisan. For this reason, as the condition for an investigation to be initiated against him has not been fulfilled as per Law No. 1136, a decision on the stay of the proceedings should have been made by the court.

4. It is not acceptable that the court has continued with the proceedings and given a decision to ban Attn. Yakisan from the prosecution. Therefore, the decision is unlawful.

V. The decision made according to CMK article 151/3‐4‐5‐6 exceeds the limits permitted by the law.

CMK article 151/6 reads “The defense counsel or the representative is not entitled to visit the individual at the jail or correctional facility, whom he is defending or representing for the duration of the ban, even if the visit is related to different cases.”

A ban that is not in the text of the code lacks any legal basis, and therefore is not legal. And it also shows that the decision is given to restrict the right of defense of the individuals tried in this lawsuit.